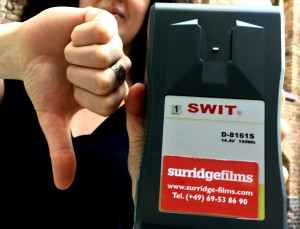 Watch out Camera Crews all over taking flights! Airport security now only allows two lithium-ion camera batteries with a maximum wattage of 160W per battery as hand luggage. No batteries at all allowed in check-in luggage.

Since April 2016, lithium-ion batteries banned as cargo on passenger planes. Spare (uninstalled) lithium ion and lithium metal batteries must be carried in carry-on baggage only. According to the FAA (Federal Aviation Administration) there is a limit of two spare batteries per person for the larger lithium ion batteries described above (101-160 watt hours per battery).
The U.S. Federal Aviation Administration has warned airlines that fires from lithium batteries have the potential to take down airliners because they are so difficult for on-board fire extinguishers to put out.

This presents a big problem for all crews travelling around, however, CCG is on call night and day with a huge supply of batteries for your next shoot 🙂