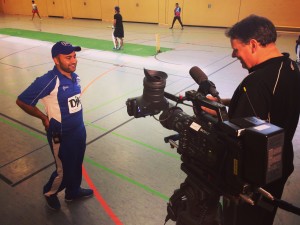 We sent one of our Cologne based crews to shoot an interesting event in Essen for Sunset and Vine Asia, who are producing a series called Cricket For Social Change.The influx of asylum seekers into Germany, especially from cricket-mad Pakistan and Afghanistan, has created an unexpected boom for the sport in a country where football has long been king.
Of the 476,649 people who applied for asylum in Germany last year, 31,902 came from Afghanistan alone, with a further 8,472 from Pakistan, which has seen the German Cricket Federation (DCB) bombarded with a simple question: “Where can I play?”

We shot Prores on the ever so popular sony FS7.