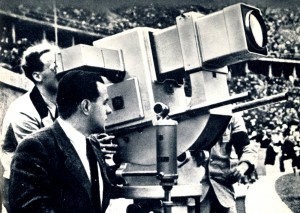 We’ve just completed a C300 testimonials shoot in Berlin for a show called “Hitler’s Inner Circle”. It’s amazing how many Second World War docs are still being produced. The challenging part was to film GVs of Berlin without anything new in frame… Like it was during the Third Reich.
photo by Telefunken-Bild, Berlin (CC BY-SA 3.0)